NKU Tackles Carbon Footprint one commuter at a time

Written by Jake on November 22, 2016. Posted in Uncategorized.

Eighty-six percent of students drive to campus alone in their own vehicle, according to a university administered commuter survey from February 2016.

But Leuhh Butsch is not one of them.

Butsch, an elementary education major, rides to school with two other students, four days a week.

She is among the 6 percent of students who carpool to campus.

“We all have a lot of our classes together,” Butsch said. “I don’t think the bus even goes out by my house. Plus, I can be on my own schedule and don’t have to worry about the routes or anything.”

While Butsch said she carpools because of the convenience, NKU’s Office of Sustainability has worked to provide several alternative transportation initiatives in an effort to decrease the school’s carbon footprint.

Partially due to the staggering rate of commuters, the sustainability department has promoted use of the TANK bus, as well as the on-campus bikeshare program. Students can even borrow a vehicle through Zipcar, a car-sharing program NKU took on in March 2015. 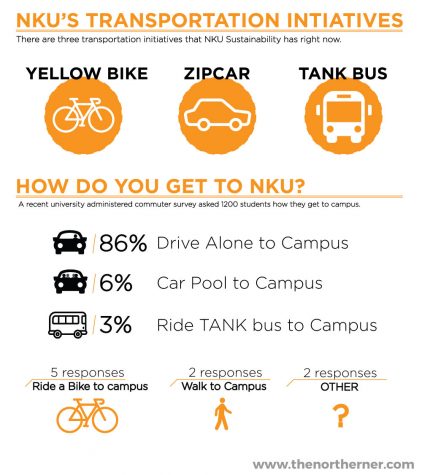 Tess Phinney, sustainability manager for NKU, said a greenhouse gas emissions inventory is completed every year that allows the university to track its carbon footprint.

“Our commuting data is actually a huge component of our institutional greenhouse gas emissions,” Phinney said. “We are aiming to get that 86 percent lower in the next survey.”

NKU’s biannual survey, which received 1,200 student responses, asked the NKU community a range of questions regarding their transportation techniques.

Elijah Grant, a junior business informatics major, is a part of the 3 percent of students who ride the TANK bus.

He said riding the bus eight times a week provides an alternative to the obstacles of on-campus parking.

“It’s really expensive to park on campus,” Grant said. “The environmental advantages are a plus, too.”

For years NKU students have had access to free TANK transportation just by showing their NKU all card.

In addition to promoting the use of the TANK bus, the Office of Sustainability has also played an instrumental part in launching the bike share program, which came to campus in April 2015.

The bike share program allows students to check out a bike with their smartphones for up to two hours at no cost. Three hubs located at Callahan, the Student Union, and in the residential village provide an eco-friendly way to traverse campus.

Students have a third option as well: renting from the Zipcar service located near the Welcome Center. Students can join a membership to Zipcar and rent one of the two rental cars available on campus for up to an entire weekend. The membership covers gas and insurance on the vehicle.

“There’s even a possibility of increasing the number of zipcars if there is a demand for it,” Phinney said.

Students now have two more alternative transportation options. These initiatives are a way to reduce the University’s gas emissions.

“I want to see people taking advantage of these services,” Phinney said. “Not many other places have free transportation.”

The next commuter survey in 2018 will address the usage of the bikes and Zipcar initiatives.

Did you find apk for android? You can find new Free Android Games and apps.